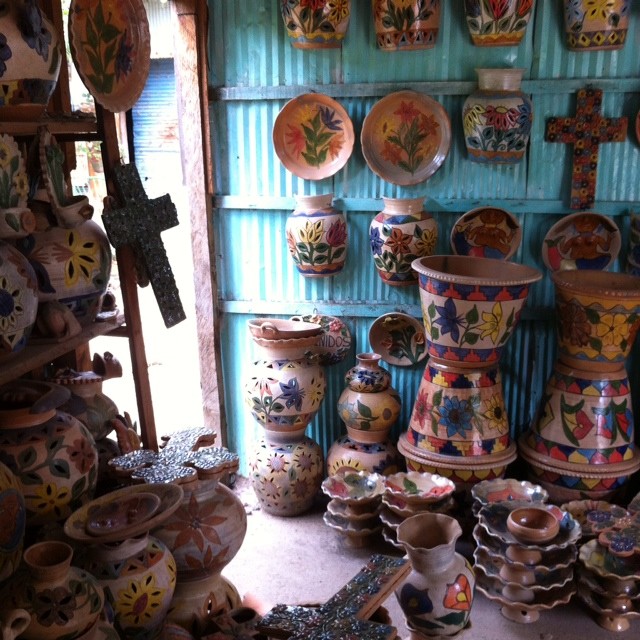 So there’s been a few more guests join me at the Casa over the last week including an artist by the name of Isaiah Zagar who created the Magic Gardens in Philadelphia, seriously google them they’re amazing. So that has provided some interesting discussions over the breakfast table. I also started helping out at Colectivo 1050 where I ogled and touched all their pottery as well as helping them make candles, packing, polishing, stacking and arranging things around the place.

Over the weekend I attended a course in Barro Negro (black clay) with Oscar Cruz a ceramic artist proficient in the dark arts from San Bartolo. This was my first experience hand building a vessel with only my hands, needless to say it was hard work and I wasn’t entirely impressed with my results but really enjoyed the process.

I spent the following day gathering more materials and then opted for a swim to escape the heat. From the edge of the pool I watched about 20 hawks gliding in the thermals above me, I’ve never seen that many hawks together at once, I was stunned and in awe as I watched them move through the channels in the air for about 20 minutes. When ever I see a hawk I’m reminded of a dear friend that’s passed and know he is watching over me. It was a pretty magical experience.

Today I went out to Atzompa which is a town famous for it’s traditional green pottery. I caught a collectivo to get there, which is a shared taxi so it’s cheaper. First the driver went the wrong direction into the city and round about for 20 minutes until I pointed out we were going the wrong way. By the time we  got there he grossly overcharged me and in my dismay I disgruntledly paid and stormed off. This soon fell away upon entering Dolores Porras home now lived in by her son Rolando Regino Porras where I was to make pottery for the day. My Spanish is pretty minimal and Rolando’s English the same so there were few verbal exchanges other than gestures and laughter at our lack of understanding at times, regardless of this he showed me some hand building and coiling techniques and I made 3 glorious vessels. I was very happy with the results and each one I got a little bit better. It was nice to be making some larger works and with no machinery involved. After a few hours and mosquito bites on top of mosquito bites it was time to call it a day. I’ve decided to work with him a few times this week as well as heading out to San Bartolo to pick up my black clay work that should be fired on Thursday.

So now things are humming along nicely, the only problem being the countdown till I leave. Hopefully I can smash out as many pots as possible in the time I have left. The next problem will be getting them home, where ever that is haha!